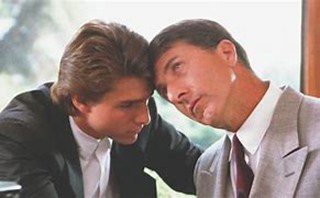 In 1988 a film staring Tom Cruise and Dustin Hoffman was released.  The story was never, in the beginning, about Autism.  It was a story of two brothers.

Written by the Oscar-winning screenwriter Barry Morrow it went on secure 4 Oscars and was the US’s highest grossing film of the year.  Psychiatrist, Dr Darold Treffert who worked and advised on the film said “Rain Man was the best thing that ever happened to autism, no gigantic public education or PR effort could have produced the sensational awareness that Rain Man brought to the national and international radar screen.”

It begins by depicting Tom Cruise as a man with a mission ‘Charlie’, to make money by importing and selling high performance vehicles.  He then learns of his fathers death and, after enquires as to who will financially benefit, discovers a brother who has remained a stranger to him since childhood.  After not taking this news particularly well, he kidnaps ‘Raymond’ before taking him on road trip across America.  The journey, particularly for Charlie starts here and it concludes with a fragile understanding and bond.

Without doubt, it was a successful film 30+ years ago but what is surprising is the dialogue surrounding it now, when other movies have disappeared with time and culture.   It goes without saying that the hugely successful actors will have played a part in this, however this only provides part of the story.

Dustin Hoffman’s Character ‘Raymond’ was based on his observations, discussions and connections with a number of autistic people.  Indeed, Hoffman gave credit to them when he accepted his Oscar the following year.

Perhaps, if the film hadn’t been so high profile, it wouldn’t have remained in our consciousness for so long and therefore would not have provided a polarised view of its positive effect on society.

A growing narrative started not long after the film had been released which did not share this otherwise positive stance.  Indeed, even today, it is still hotly debated if it did the Autistic community any good at all in providing a benchmark or stereotype for society’s view of Autism.

Journalist Jan McCarthy, who wrote  ‘Rain Man at 30: damaging stereotype or ‘the best thing that happened to autism’?’ worked with Chris Bonnello of Autistic Not Weird to write their story.  After being able to canvass Facebook followers they were no closer to a definite answer.  “Views were mixed. Although some enjoyed Rain Man, many found it ‘dated’ and ‘inaccurate’.

There is no doubt that it is an exceptional film.  I have autistic family and friends and found it moving and an accurate depiction of autistic characteristics in many areas.  Others have suggested that it provides society with a narrative that every autistic person is a genius or ‘savant’, then resulting in disappointment when they can’t ‘count cards’

Autism is often referred to – from the medical model – as being a ‘Spectrum Disorder’. Showing that there is not just one typical presentation of Autism, and so it would seem with ‘Rain Man’ that there are many varying opinions surrounding its message.